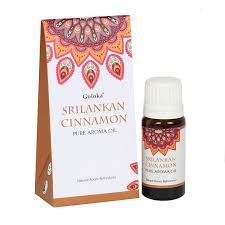 A classic, warm, spicy aromatic Oil, that smells of Christmas. You can make your own natural home deodorizer and freshener by combining therapeutic scents like Cinnamon, Orange, Lemon and Cloves in a diffuser or spray bottle.

Pure Aroma Oil is extracted from two points on a Cinnamon Tree “Bark Oil” extracted from the outer bark of the tree, it is very potent with a strong perfume-like scent, an expensive oil to produce. “Leaf Oil” has a light, musky and spicy scent, and less expensive to produce than Bark Oil.

The effect of this essential oil fights Depression, Uplifts Mood, and induces Warm Feelings in the Body and Mind.  This oil can be used to treat nausea and to stop vomiting. It induces a refreshing feeling and drives away feelings which bring on nausea and vomiting.