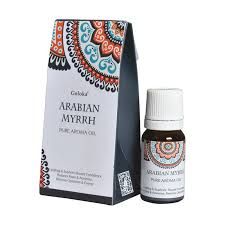 Myrrh was important in biblical times as a spice, a natural healing remedy, to purify the dead and is best known as one of the gifts the three wise men brought to Jesus.  Myrrh has more to offer us, as a medicine which remains today a part of traditional Chinese medicine, and the Jews used it as an anointing oil in worship services.

Myrrh with its sweet, smoky, deep musky scent which can have a little bitter aroma  blends well with Frankincense, Lavender, Rose, Patchouli, Rosewood and Sandalwood.

It is also an “Emmenagogue” which means that it normalizes menstruation and relieves associated symptoms like mood swings and hormonal imbalances.

Word of Caution: Despite these benefits of myrrh essential oil, it can have toxic effects if used in excess. It should be avoided by pregnant women since it stimulates the uterus and could result in miscarriage.

Myrrh was extensively used by the Ancient Egyptians, most notably in the sacred incense dedicated to Isis known as ‘Kyphi’, which was eventually used to treat all manner of ills as well as for religious ceremonies.

Due to myrrh’s remarkable ability to preserve flesh, it was employed by the Egyptians in their unsurpassed embalming processes, the results of which are still intact today as can be seen in museums around the world. Myrrh was also used by Egyptian women as a cosmetic ingredient to reduce wrinkles and keep a youthful complexion.

FRAGRANCE IS ALSO AVALIABLE AS INCENSE